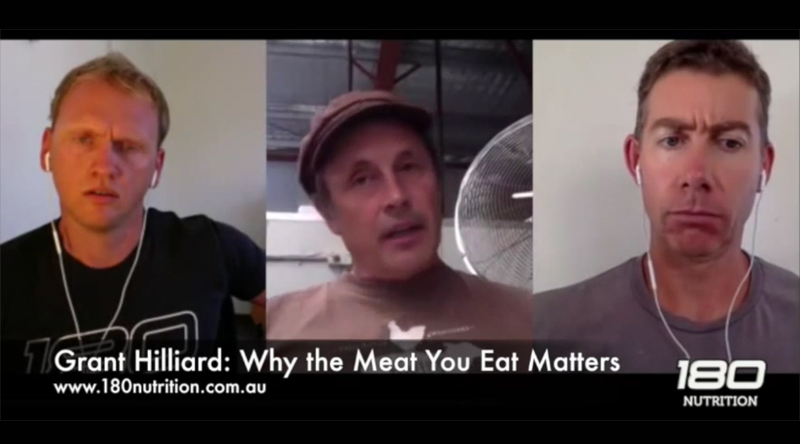 This podcast from 180nutrition.com.au goes into great detail showing what the current situation our quality of our meats in Australia are and what the future of sustainability for the industry in Australia so we can get the best quality food possible.

I hope the Australian government take note of the brilliant work Grant Hilliard at Feather and Bone is doing with their operating model as an ethical meat provider from sustainability raised animals.

I really hope this one day will become law for our own health and planets sustainability.

My Notes from the pod cast video at the bottom:

Grain-Fed beef compared to Grass-fed Source
A number of things happen when you feed cattle grain. I mean, they can accommodate it, but
as a ruminant, they’re perfectly designed to metabolize the nutrient that they find in complex pasture into
body mass.

So you want to eat an animal that’s at the absolute peak of its health. Now, one thing that happens with grain
is that they actually get quite sick as they change over to grain and it produces… A ruminant should be at a neutral ph. What high levels of is that they produce an acid gut, and so most grain-fed animals are suffering
from acidosis all the time. Presumably, you want an animal that’s in balance.

Chickens and Pigs
In Australia at the moment, the term ‘Free Range’ can legally be attached to an egg from a 40,000 chickens per hectare farm (0.25 square metre per bird) and an egg from a farm like Farmer Brown where the stocking density is 15 chooks per hectare. ‘Free Range’ is also the label used in marketing pork from pigs that have only lived on pasture for three weeks before being moved into sheds for the remainder of their lives.

Grass Fed Beef in Australia
If an animal is fed for less than 100 days on grain, you’re not even allowed to call it grain-fed, you have to call it grass-fed.

It’s a weird thing, so a lot of people who buy grass-fed beef, in fact, may be buying beef that’s been fed for up to 100 days on grain.

Most beef in Australia sold is yearling beef. It’s sold at 14 months old which is essentially teenager or young teenager. It’s not a lot of growing so it’s a high return in terms of kilogram to the grower, but it’s sort of at a certain size but it’s not at a certain quality.

Pork in Australia
In Australia around 98 percent of pigs are grown in intensive conditions, and to me that’s an unethical position
to take. I just don’t think we should be eating pigs that are grown in that way.

If you’ve ever seen pigs outside, and very few people have, I mean, we have no picture of what a herd of pigs looks like outside, because they’re just nonexistent.

We source from maybe six farms right through New South Wales that grow all their pigs outside, but I think
most of your viewers, I’d be surprised if more than two percent have actually seen a herd of pigs outside,
more than one or two at a time.

Question we Should Be Asking Our Butcher

Where the animal came from?

They may say “It came from XXCurrimundi?? or XX but what they mean by that is that it, that’s where it was killed. Which is a totally different story.

If they don’t know which farm then they’ll never know what the history of that animal is. Was it given antibiotics at any time? Was it given growth hormones at any time? When it was grass-fed, was it Set Stock that is, was it just left in a field for an extended period of time or was it actively moved on to fresh grass every single day?
What was history of the animal from from embryo to here? And it’s a long process that can be up to three years.