Ketosis has recently become quite a popular topic. Is it the magic cure for diabetes and obesity? Will it help you to lose weight and reclaim your lost energy? Well, nothing is certain nor guaranteed. Don’t do the keto diet until you read this.

What Ketosis Shouldn’t Be

Although extremely effective for rapid weight loss – it literally melts off body fat like butter on a stove – it shouldn’t be used solely for this purpose. Don’t get me wrong, the first dietary regimen I would put obese people on is keto. It’s just that there also needs to occur a change somewhere else.
Ketosis shouldn’t be a quick and easy prison-break from your body that carries a few (or a lot more) extra pounds. For me, it has nothing to do with losing fat, as I’m already as lean as I can get, but more with the fact that I’m burning ketones as my primary fuel source.

When glucose (aka carbohydrates) enters the mitochondrial furnace of our cells, it goes through a process called glycation, which results in the creation of a molecule called pyruvate.

Fatty acids on the other hand get transformed into a ketone body called acetoacetate, which then gets converted further into 2 additional molecules called beta-hydroxybutyrate and acetone.

The difference between the two is that ketone bodies can produce 25% more potential energy than pyruvate. Even more, the by-products of burning sugar are advanced glycation end-products (AGEs), that increase bodily inflammation and promote diabetes.

Excessive carbohydrate metabolism degrades the efficiency of our cells and promotes aging, whereas ketones increase our mitochondrial density, make us more powerful than ever before and promote longevity.

Once You Go Keto You Never Want to…

Why would anyone want to pass out on such an opportunity to enhance one’s biological excellence. Being in a state of nutritional ketosis, at least for the majority of time, allows you to improve the quality of your life exponentially. Not just 25% but even more, as your cognition will also improve.

After you overcome the “keto flu,” which is only caused by a withdrawal from sugar, you experience mental clarity and sharpness. Once your brain gets used to burning fat, it starts to get more than 75% of its energy from ketones. You’ll have constant access to premium fuel and your mind has the opportunity to flourish, instead of being starved and dependent of glucose.

The Case of Diabetes and Cancer

The keto diet should be a staple for everyone with blood sugar problems. It doesn’t make sense to keep giving diabetics insulin shots and lots of carbohydrates.

Ketosis goes to the root cause of the problem and prevents the release of excessive insulin. Fasting and low carb eating have been successfully used to reverse diabetes, lower blood pressure, reduce bad cholesterol and inflammation.

Eating fat while restricting carbohydrates puts your body under completely different conditions. In ketosis, you’ll be burning most of the saturated fat for fuel instead of clogging it in your arteries. What’s more, you’ll clear your blood stream from glucose, which in excess leads to insulin resistance.

In the case of cancer, the keto diet isn’t definite. However, fasting and low carb eating have been yet again successfully used here as well to starve tumor cells. It’s a step in the right direction.

Do you have to be in ketosis all of the time? Not necessarily. Unless you’re diabetic or have any other serious medical condition then you shouldn’t worry about being in the exact optimal range of serum blood ketones and whatnot.

Instead, the idea behind the keto diet is to follow a healthy lifestyle. Something that doesn’t degrade or take away from you, but adds onto it.

Ketosis is an amazing tool for fat loss, but it shouldn’t end there. Don’t start it as a short term thing, because you’ll be missing out on all of the other benefits.

If you think that it’s a get out of jail free card that you withdraw and start eating junk again, then you’re wrong. It’s not a quick fix and for it to be successful it requires a lot of effort, which in the end makes it all worth it.

If you want to learn more about how to get into ketosis without losing your mind, optimize your biology, improve your health, reclaim the energy you once had and protect yourself against disease, then check out my FREE ketogenic diet e-book called Simple Keto. Take the plunge and don’t look back, you won’t regret it.

Also, check out my blog for more posts about optimizing our biology with nutrition, exercise and other forms of physiological manipulations, hacks etc. 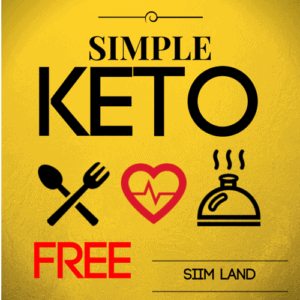