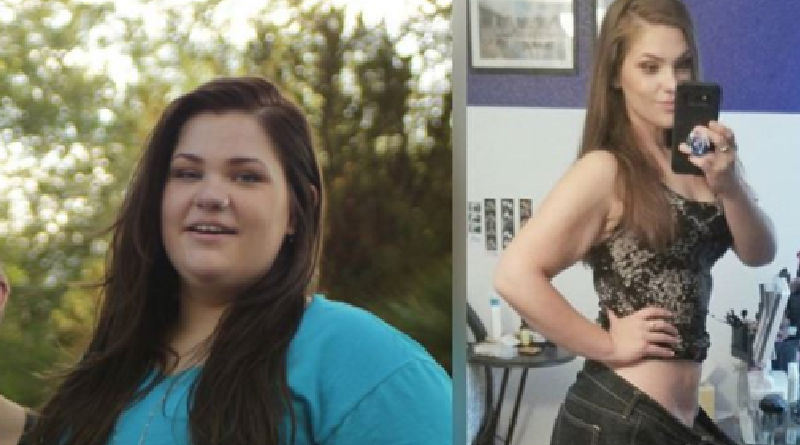 Kristina, who recently shared her journey with losing 100 over pounds with POPSUGAR, adopted the ketogenic diet. 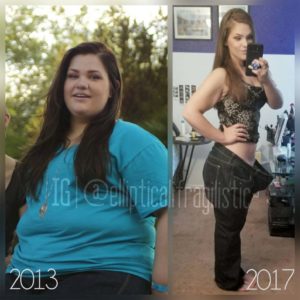 She is proof that it all starts with a choice and a plan, her circumstances were not ideal to start, she dealt with the following life challanges:

A choice! And a Plan!

She points out “Don’t feel like you have to know EVERYTHING when you start. I’m still learning new things about keto now, three years in! Get the basics, and figure it out as you go.”

In March 2014 she researched Keto on  Reddit. After doing a few hours of research, she made the switch.

She made a plan and tracked her Keto Macros and said “Not everyone on keto tracks all their food, but it works for me”

When she met her initial goal

Not everything always goes to plan and you may hover around a weight, and have a few set backs at times, I know this well, Kristina says “A few stumbles are bound to happen on any weight-loss journey, “but I’m back at it and super close to a new low weight.”

What Advice Does Kristina Offer

“Making it a habit. Eating low-carb just became . . . what I did. A habit. Same with going to the gym five times a week. It was hard to adjust at first, and there were lots of days that I just wanted to go home and be lazy, but I pushed myself to make it a habit. Now it feels weird NOT to go to the gym! I love the saying that’s something like, ‘People say motivation doesn’t last. Well, neither does bathing. That’s why we recommend it daily.’ You have to make the choice to commit to it every day.”

For my first year I just focused on diet,  I knew that if I changed too much, too fast, I’d burn out and quit.

I drink at least a gallon of water a day, but don’t snack.

I’ve tried to cut out snacks since the beginning, because I much prefer having a full meal.

I shared my journey on Instagram and found it a huge motivator, for when i was ready for the gym.

Whats Next for Kristina

She is now focusing on her building muscle aspect of her journey and says:

Her Final piece of advice is “Don’t feel like you have to make a huge lifestyle change all at once. You don’t need to eat totally clean AND live in the gym AND get a Fitbit AND start juicing AND do a detox, or whatever. Start where you start. That’s better than nothing.”

Sadly due to life circumstances, Kristina is no longer doing Keto, the way I personally have structured my diet is much more flexible than stand Keto and have been doing it for over 6 years, I hope one day to share this structure with others as I personally feel that the limited published version is too restrictive.

Wow, I sure stopped writing on here, didn’t I?

It’s been almost a year since my last blog post — woops.
The last year has been hard. Really hard. My chronic hives flared up in late January and didn’t get resolved until May. That was months of pain, discomfort, and hopelessness. A chronic illness really takes it out of you.
Not to mention, other things in my home life were…not going so great, let’s say that. I dealt with it by eating…. a lot. A lot a lot.
It all came to a head in mid-March and I decided I needed to change my life. In May, I finally called it quits with keto after months of carb bingeing, getting back into keto for 4 -5 days, carb bingeing, getting back into keto….etc. It wasn’t healthy, physically or mentally.
In August, I left my job and moved to Texas to live with my boyfriend, Justin, whom I’ve been with since 2015. And it was scary! And hard! And a lot of adulting stuff.
Since then, I’ve been settling in and looking for work (ahhhhhhhh, the most soul-sucking of activities) and gettin used to life here.
For a while, I didn’t notice the difference between normal stress and depression-stress. I figured it was supposed to be this hard — moving, changing your life, all that stuff. But eventually I figured it out: my meds weren’t working the way they needed to anymore. I’ve been on antidepressants for many years. I don’t like to talk about it because of course, the dumb stigma surrounding it, and having had ‘friends’ throw it in my face in the past (they are not friends. Anyone who uses your mental health against you is not a friend and you need to cut them out of your life). But that’s the truth. I need medication to make my brain work like a normal brain.
Anyway.
As other people on psychoactive medication know, the process of finding a new medication is long and hard. I’ve been tapering off my main antidepressant (viibryd, for those who have asked) since December. Today is the first day of trying a new one (effexor) and I’m hopeful but cautious. Side effects can be rough. It can take weeks to months to know if it’s working. But I’m trying.
While tapering, my anxiety went through the roof. I’d somehow taken viibryd for nearly 4 years without knowing it was also an anti-anxiety
I really just thought I’d *gotten over* being anxious. L M A O O O O O O GIRL. I did not.
And then came the apathy. Just…. a flat, gray, uncaring about anything. Eating too much? I don’t care. Skipping the gym? Don’t care. Staying in bed all day? Don’t care. Neglecting instagram, isolating from my friends? Don’t care.
It may be a hard slog for the….well, the foreseeable future, to be honest. I don’t know if this med will work for me. I don’t know when I’ll know. But I am so. tired. of my own crap at this point that I’m gritting my teeth and doing things again.
I turned my step notifications back on on my fitbit. I’m going to actually try to hit my step goal more than never. I’m going to eat in a deficit, even if it’s just a small one. I’m going to go to the gym.
So that’s that! That’s my life right now! Mental health is hard and bad mental health makes lots of things very hard, and that’s just reality! It’s 1:30 PM and I’m still in my pajamas but I *have* left the apartment today, and I *will* go to the gym later. I’m trying.
And I’ll try to write on here…………. again…….. ?? with much less of a gap in between posts.

Wow, I sure stopped writing on here, didn’t I?